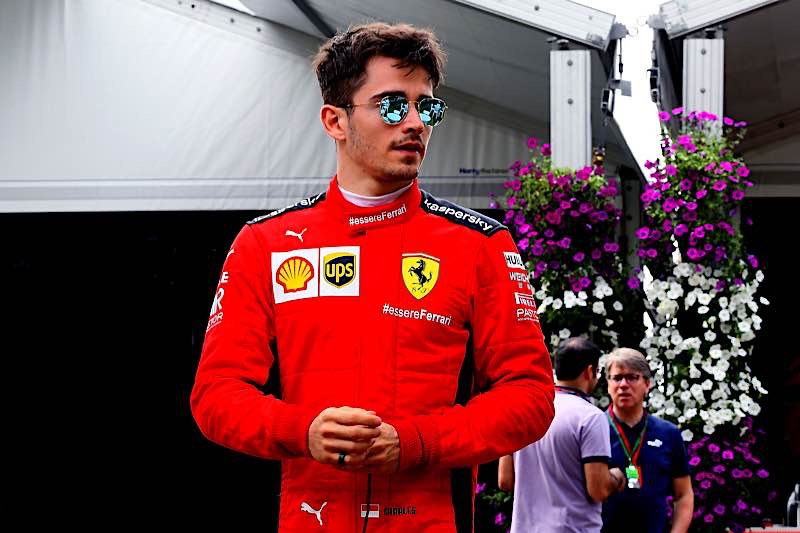 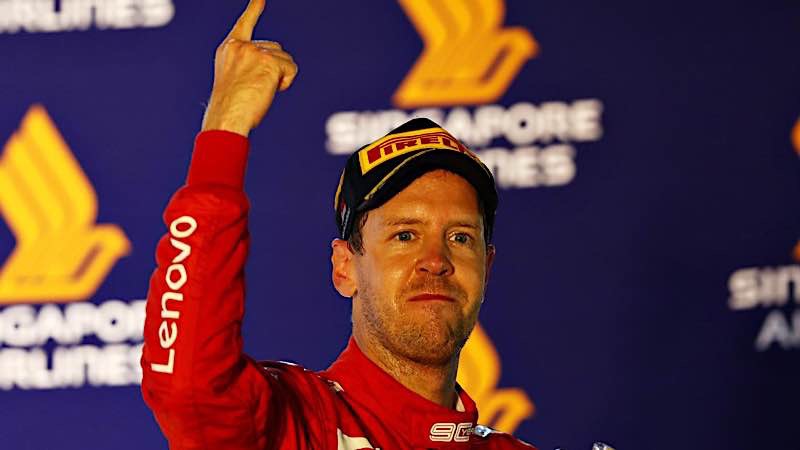 Seb is famous for his salute 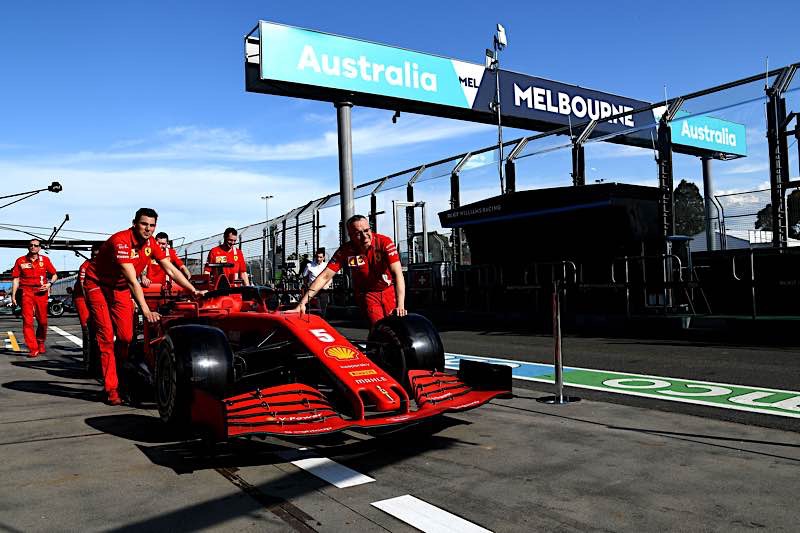 Nothing in life is what it first seems. Red wine tasted terrible when I was 12. Leylandii seemed an easy quick way of getting a garden screen 30 years ago. And the news that Seb had decided to not sign a new contract came as a shock. Well just as I’ve since learned that red wine is quite nice and Leylandii are good for the chainsaw and shredder, so a bit of reflection has made Seb’s decision a bit little less surprising.

It’s arguable that the root can be traced back to the loss of James Allison in 2016. This was followed by a poor year as the team regrouped. Whilst ‘17 and ‘18 were much better – at one stage a championship looked a possibility – there were a few too many disappointing mistakes from Seb in 2019. Whether this was due to demotivation or trying too hard to match the new blood of Charles can only be the subject of speculation, but there is no doubt at times last year Seb looked uncomfortable, and we said so. It seems strange to say it about the most Italian of teams, but some of Ferraris most successful times have been with Brits in senior positions. Seb’s a known anglophile, and it’s not beyond possibility that he saw the loss of Allison as the last chance to relive the days of Ross Brawn and Nigel Stepney. When the offer of a new contract reputedly amounted to a year at a significant salary cut, the decision couldn’t have been hard.

There has been speculation as to where he will move, and some of these moves could amount to a swap of drivers. However, for a host of reasons there are just two teams who I would be confident would be in F1 in 2 years time. If you don’t know the first, then this website is not for you. But another team also started making road cars as a sideline and got quite good at it – McLaren. They are a survivor. But why would Seb go to what is currently a “best of the rest” team? A move to a team other than Mercedes would just leave his career to wither away, scarcely a good memory. And I don’t see that as likely unless Hamilton moves to Ferrari, which I discuss later and reject. In my view, retirement beckons.

Before I expand let me set out some of my assumptions:

Currently the sport’s most successful driver, Lewis Hamilton would undoubtedly like to have a Maranello drive before he retires. He may even believe he could galvanise the team to a championship for him. And there, I think, is a problem. The championship would be “for him”, but in a Ferrari; the car is the post script. This isn’t the culture of the team. There is also the issue that although Lewis never lacks confidence, the thought of a challenge from Charles may be too intimidating. For the team, two number ones would be an unmanageable problem.

There is, however, another man whose CV has the same big gap as Seb’s, the gap with “Ferrari World Champion” written in pencil and with a question mark. Is Fernando Alonso too old as he turns 40 in 2021? Could he achieve what he didn’t in 5 seasons? I suspect he thinks he could do it, but then Charles hovers with a reputation-scythe honed by a talent that is a little too abrasive to ignore. And Fernando would never be a number 2.

My conscience says I should mention Verstappen. Surely the driver who redefines aggression and opportunism, he will never be a champion in a Red Bull, but would he fit in at Maranello? And would they want two “whiz-kids”? No.

First candidate here is a man who could arguably fit in the first category, Daniel Ricciardo. A superb driver and, unusually amongst professional sportsmen, an apparently likeable personality with some maturity.  Despite his obvious ambitions, I think he might be able to take Charles being treated as number 1. He has, after all, had Verstappen for a team-mate. A year with Renault has been a year with a mediocre car which hasn’t improved as was promised.

The world’s ultimate no2 is of course Valteri Bottas. Plucked from Williams by Mercedes, he has shown himself to consistently go nearly as quickly as Hamilton, sometimes quicker, and seems to have the air of a hard working team-player. He might now be too expensive for a number 2, but may be swayed by the magic of the name, and also by the chance of a pot at the World Championship which he surely will never get at Mercedes.

Albon, Norris and Russell seem to come as a matched set. They each seem highly talented, but Russell (in any case contracted to Mercedes) has difficulty proving anything in the perpetually woeful Williams, and the other two are, measured by race results, outshone by team-mates. Which brings us to Carlos Sainz. He has impressed in the McLaren, and when at Toro Rosso outshone Verstappen on occasions. He also seems to be a thinker.

In the case of both the “Sound No 2” and the “Really?” categories, I think we are mainly looking for somebody to effectively hold the fort until either Leclerc is so firmly established as a star that a newcomer will not destabilise him, or (heaven forbid) his star stops ascending.  So a new Ferrari driver may not need to be a potential World Champion, even if Ricciardo undoubtedly is.

I confess to having criticised Danill Kvyat in the past, and he appears in this list courtesy of co-writer Nigel Bland. My prejudice is probably based on him making mistakes, but then, Red Bull is a notoriously pressure-based team. However, he is undoubtedly quick on occasions, is known to Ferrari having had a contract in 2018, and could be a cost-effective signing. No, I’m not convinced either.

Also unconvincing is bringing Hulkenberg back from retirement. Always a nearly-man, his Renault fate was sealed when he crashed out in Germany last year. An unlucky driver with a degree of unpredictability may not be the right choice.

Giovanazzi has a history of being number 3 Ferrari driver in 2017, and is currently with Ferrari Reserves, or Alfa Romeo as they are more quaintly known. However, there is another man with past team connections, who was rather more successful in 2019 than Giovanazzi, and has a strong popular following. Despite the fact that he will be 42 at the end of the 2021 season Kimi Raikkonen would in my view be a sound choice for a holding year, especially as the cars will now be unchanged for 2021. He is known to the team, would, I think, accept no2 status, and is one of the great triers when he is properly motivated. As Ferrari’s last World Champion he cannot other than command respect from Charles. I should add that my learned friend Mr Bland commented “you are right in all you say, and if it happens it will give completely the wrong message about F1”.

Like many readers of this website, I know more about Formula 2 40 years ago than I do about it last year, so did some Googling. Here are the Ferrari Driver Academy members in F2. Picking one for 2021 would be a brave move.

Giuliano Alesi (son of Jean). 15th in F2 2019, became an Academy member at the same time as Leclerc.

And finally, not a current Academy member but a former one, Guanyu Zhou is Chinese (a major market for Ferrari), was 7th in F2 in 2019 and is currently a Renault test driver, so may be unavailable.

Who gets the drive for 2021, or even 2020 if things move forward rapidly, depends on whether the aim is to get somebody who will perform well for a year while being a great support for Leclerc  and allow a second phase of talent to be introduced in 2022, or whether it’s a long term appointment. If the first, then Raikkonen would be my choice. Otherwise both Bottas and Sainz would work. Ricciardo, however, might fit either role. And wouldn’t you love to hear him pronouncing “Ferraaari”?