So, Who is Carlos Sainz? 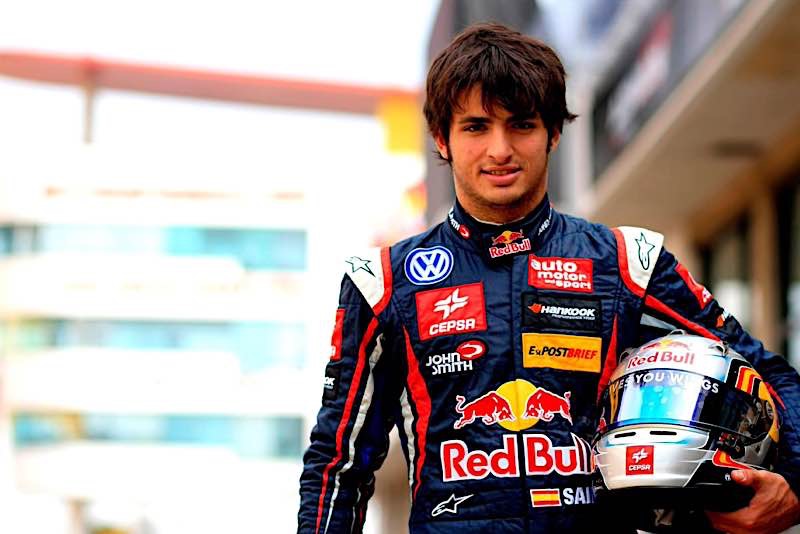 Carlos, in F3 days when he drove a Dallara, the "other" Italian racing car.

With Ferrari having announced recently that they would not be offering a contract for 2021 to Sebastian Vettel, speculation centred on who would be the recipient of one of the most prestigious seats in F1; a seat in one of the 6 cars which can regularly win GPs in the current format. As my esteemed colleague Tony Cotton speculated on this site Carlos Sainz Jnr was a strong favourite, having completed a successful first year at McLaren in 2019. The Scuderia announced his recruitment alongside Charles Leclerc for the 2021 and 2022 seasons. So what is the background to Carlos’s appointment?

Carlos is now 25 (born September 1994), the son of Carlos Sainz Snr. We all remember Snr as a double World Rally Champion, and even more so as a not World Champion when his Corolla broke down 300 metres from the end of the RAC Rally last stage and co-driver Moya both kicked the car and threw his helmet through the back window. He continues to compete and test/develop cars for manufacturers, and won the 2020 Dakar Rally. Having driven for Ford, Subaru, Toyota and Lancia in the WRC, tested for VW and BMW, and even raced FF1600 and FF2000 single seaters in the early 80’s, Carlos Snr has been a guide to his son for the entirety of his career. While not attending all races the family support is ever present with cousin Carlos Onoro acting as young Sainz’z manager. Thus the new Ferrari recruit comes from a grounded, but very successful, family background.

Carlos Jnr commenced his 4 wheel career in Karts, progressing in 2009 to the European KF3 Championship. There his main opposition came from Nyck de Vries and Dani Kvyat. Carlos was pipped by Nyck on that occasion. Nyck’s now the current Formula 2 Champion and Mercedes’ driver in Formula E, so he might be wondering where his life went wrong.

2010 saw Carlos move to cars with a season in Formula BMW, aged 15. Initially racing in the Pacific Championship, and subsequently in Europe, Carlos won 3 of his 25 races. His recruitment into the Red Bull Junior program would guide his career for the next 7 years.

Formula Renault in Europe was a logical progression for 2011, with past Champions Koiranen Motorsport. Together they won the NEC championship while finishing 2nd in the Eurocup. “That man”  Kvyat was a team mate.

After a 2012 Macau F3 baptism, Carlos joined the hallowed Carlin Motorsport in 2012, where he competed both in the British (6th) and European (9th) Championships. He picked up 4 victories in the British campaign, including wins at Spa and Monza. Interestingly none of the drivers who beat him in the standings are currently in F1, with only Pascal Wehrlein having raced regularly in F1.

2013 saw him change to the Grand Prix support category GP3, with MW Arden, the team originally set up by current Red Bull F1 supremo Christian Horner. Unfortunately while his team mate, the regularly mentioned Dani Kvyat, won the Championship, Carlos could only manage 2 podiums and  10th place by season’s end.

On the basis of his GP3 success Dani Kvyat joined Toro Rosso for 2014, while after a  toe in the water at the end of 2013, Red Bull placed Carlos with DAMS for a full year of Formula Renault 3.5. He took 7 wins on the way to becoming Champion in a category where previous Red Bull graduates Daniel Ricciardo and Jean Eric Vergne had failed. As a result, when Seb moved to the Scuderia for the 2015 season, Kvyat was promoted to the Red Bull team and Carlos took his place at Toro Rosso. Not for the first time then, Seb proved to have a major effect on Carlos’s moves.

Carlos’ F1 career opened in Melbourne 2015 with the heavily backed Max Verstappen as his team mate. While Carlos was just 20, with 150 races on his CV, Max was 3 years his junior with only 1 season of car racing experience! Both had very successful debut years, with Max gaining the headlines as he finished 12th overall at the end of the year. Although Carlos matched his pace, unreliability meant he finished the season 15th with a best placed finish of 7th.

2016 saw the season start with Max again as his partner, but after only 4 races he was promoted to the main Red Bull team in exchange for Dani who had too many ‘racing incidents’. Although this was seen by many as an excuse to promote Max and keep his father Jos quiet, it meant Carlos had a new team mate whom he comprehensively beat over the remainder of the year.

Toro Rosso retained both drivers for 2017, and while Carlos had a very strong year it was apparent that no opportunities with the main Red Bull team were imminent. Consequently, rumours flew and  by mid-season he had signed for Renault for 2018.  With Jolyon Palmer not performing, the Red Bull loan to Renault was brought forward and he joined Nico Hulkenberg for the final 4 GP’s of the current season, but not before his best F1 result to then with 4th in Singapore.

Although Carlos was largely a match for Nico in 2018, Renault adopted another Red Bull driver for 2019 with the ‘signature signing’ of Daniel Ricciardo.  Carlos signed for McLaren as replacement for disillusioned fellow Spaniard Fernando Alonso, alongside new teenage British hope Lando Norris.

2019 turned into Carlos’ best season to date, with him winning the ‘Best of the Rest Championship’ and achieving a GP podium for the first time in Brazil. Team Manager Zak Brown has praised Carlos for his team ethic and credited him with delivering a turnaround for the team, which undoubtedly helped bring him to the attention of Maranello.

So what have Ferrari seen in Carlos? While his F1 career is good, it isn’t outstanding. But he has been very consistent and has huge experience. To date he has competed in 101 GP (more than Jackie Stewart!) but is only 25,  has yet to be a regular podium visitor and so remains hungry. To me he is very talented, emphasised by him qualifying in the top 10 for each of his 5 Monaco GPs, and finishing in the top 10 in those 5 races, with a best of 6th in 2017. While this in itself is impressive, at perhaps the most difficult circuit on the F1 calendar he has outqualified all his team mates and beaten them in the race. He’s undoubtedly been signed with a view to being a reliable but pushy number 2, with upside potential. Let’s hope he can deliver!