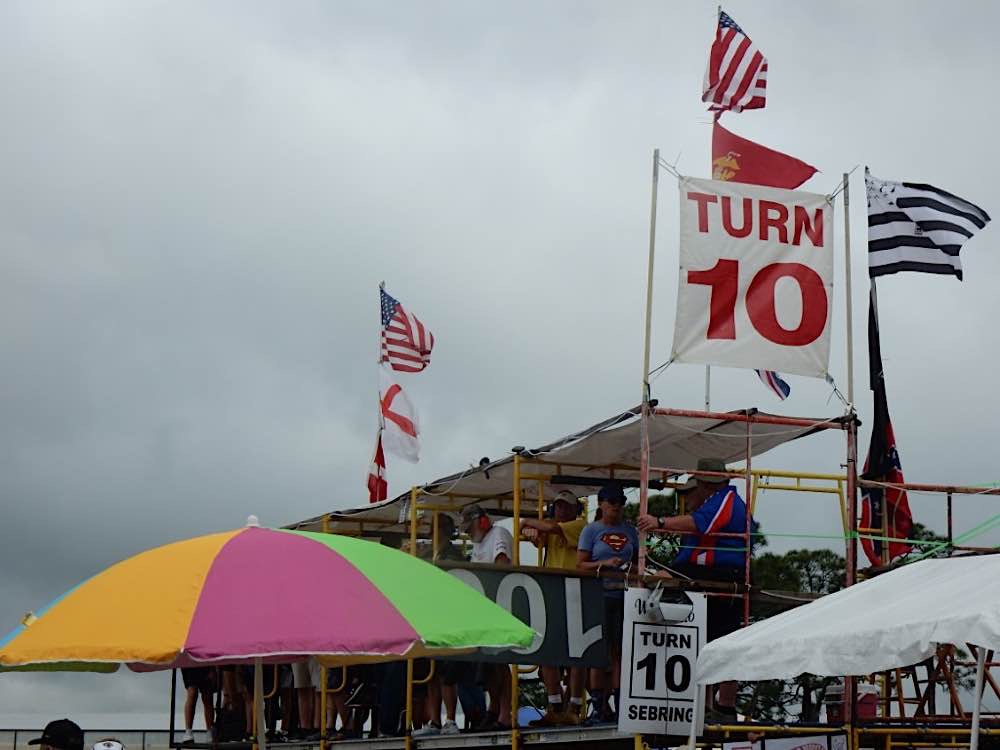 Umbrellas made an unwelcome appearance 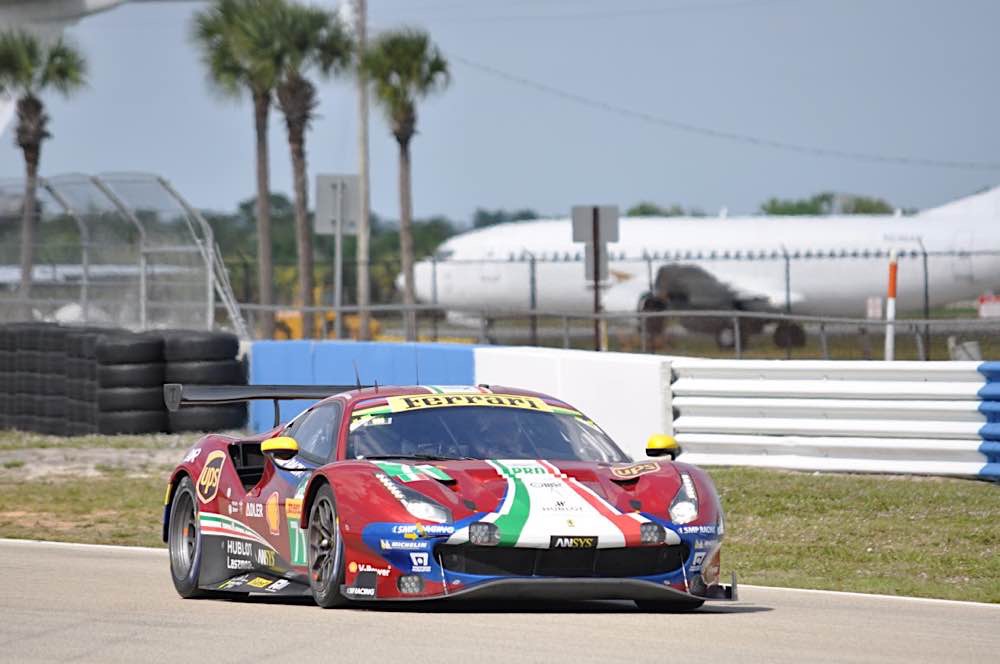 Sebring is famous for having aviation as a background 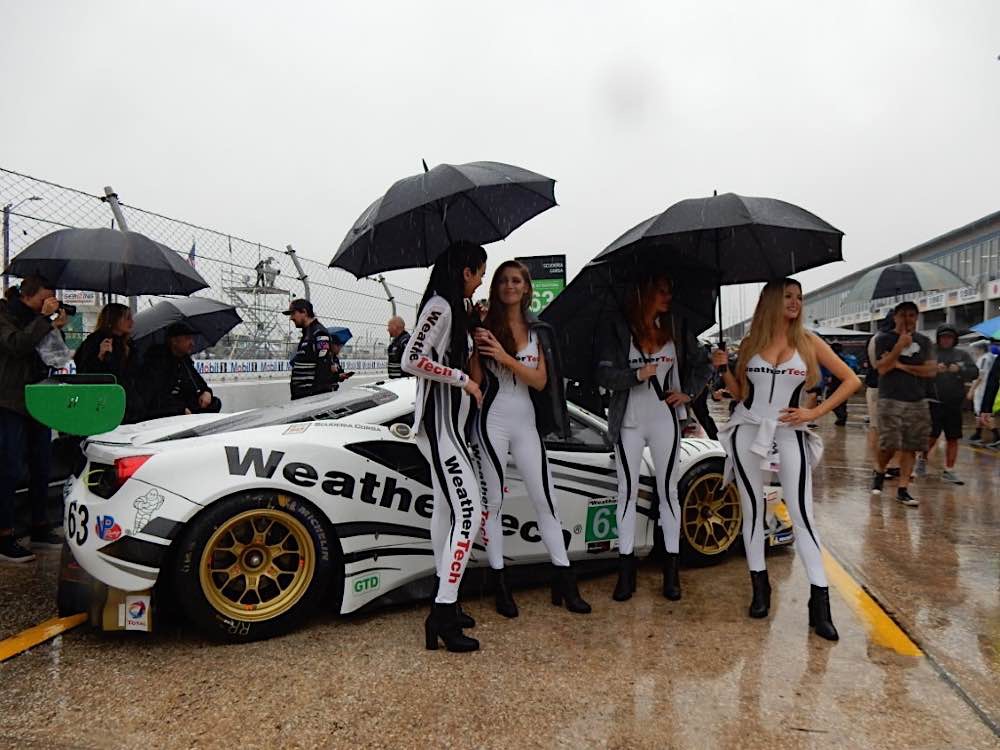 Endurance racing fans had a bumper bundle of action at Sebring over the race weekend of 13 – 16 March, as apart from the annual Mobil 1 12 Hours of Sebring presented by Advance Auto Parts, there was a round of the FIA WEC series, the “1000 Miles of Sebring”, on the Friday preceding the 12 Hour Race. As if this, with all the practice and qualifying sessions wasn’t enough, the packed four day programme also featured a 1¾ hour Prototype Challenge Race on the Thursday together with a 2 hour race in the Michelin Pilot Challenge series at lunchtime on the Friday, preceding the FIA WEC race.

The qualifying session unsurprisingly saw the pair of Toyota TSO 050 Hybrids lock out the front row of the grid, with the # 8 example of Buemi/Nakajima/Alonso taking pole position ahead of the # 7 car driven by Conway/Kobayashi/Lopez. The # 3 Rebellion R13-Gibson of Berthon/Laurent/Menezes was the best of the rest in the LMP1 class, albeit some 2.5secs off the pole position time. In the LMP2 class it was the # 38 Jackie Chan DC Racing Oreca 07-Gibson of Tung/Aubry/Richelmi that just stole the pole position honours from the sister # 37 car of Heinemeier-Hanson/ Stevens/King. The GTE Pro class pole was taken by the # 92 Porsche 911 RSR of Estre/Christensen, followed by the pair of Ford GTs in the order of the # 67 example of Tincknell/Priaulx/Bomarito and the # 66 car of Mucke/Pla/Johnson. In the GTE Am class it was another Porsche pole position, this being the # 77 Dempsey-Proton Racing entry of Ried/Andlauer/Campbell, followed closely by the similar # 56 Team Project 1example of Bergmeister/Lindsey/Perfetti.

As might be expected, barring misfortune, nobody would be able to hold a candle to the performance of the Toyotas, and that was exactly as it turned out to be. The # 8 car led from the # 7 example from the start, and was never headed before the chequered flag fell. The # 7 car did have a glitch in its run to 2ndplace, when it tagged the # 90 TF Sport Aston Martin, running over the kerbs and damaging the undertray, which forced an unscheduled stop for temporary repairs. The # 3 Rebellion of Berthon/Laurent/Menezes which had been the quickest of the privateer runners in qualifying, remained in contention for the final podium spot until late in the race, when a gearshift problem dropped it down the order to an eventual 7thplace finish. This opened the door for the # 11 SMP Racing entered BR Engineering BR1-AER, to claim the best of the rest honours driven by Aleshin/Petrov/Hartley.

As with the SMP Racing entries in the LMP1 class, it was a race of mixed fortunes for the pair of Jackie Chan DC Racing entered Oreca 07-Gibsons in the LMP2 class. The class pole sitting # 38 example was outgunned from the start by the sister # 37 car, and then succumbed to the advances of the # 36 Signatech Alpine after a few laps. It then dropped further down the order with gear selection issues, eventually losing some 30 laps whilst they were resolved, ending up the last classified finisher. Meanwhile the sister # 37 car, driven by Heinemeier-Hanson/ Stevens/King, led the class throughout the race to take the class win from the # 36 Signatech Alpine of Lapierre/Negrao/Thiriet.

In the LMGTE Pro class it was yet again a case of an inter team battle, where the slower of the pair of cars came out on top. This time it was the works Porsche 911 RSRs, where the class pole sitting # 92 example of Christensen/Estre lost out to the sister # 91 car of Lietz/Bruni, which took the class win after a lengthy battle with the # 81 BMW M8 GTE of Tomczyk/Catsburg/Sims in the closing stages of the race. Behind the 2ndplace BMW came the quickest of the Ford GTs, the # 67 example of Priaulx/Tincknell/Bomarito, which had led during the class during the early stages of the race, but was another victim of a penalty for unsafe release from its pit box. The Pair of AF Corse entered Ferrari 488 GTE EVOs were never in the hunt for the class win, unless others fell by the wayside. However, they performed strongly and reliably throughout, resulting in a 4th in class for the # 51 car driven by Pier Guidi/Calado/Serra, and a 6thin class for the # 71 Rigon/Bird/Molina driven example.

The LMGTE Am class honours also went to a Porsche, with the # 77 Dempsey-Proton Racing entered 911 RSR driven by Reid/Andlauer/Campbell taking the class win. They had battled long and hard with the # 56 Project 1 entered example driven by Bergmeister/Lindsey/Perfetti, but this was the victim of an unintentional touch by the # 54 Spirit of Race Ferrari, with which it was battling hard for position. This saw it going backwards into the tyre wall, damaging the rear diffuser, which affected its subsequent performance. The # 54 Ferrari driven by Flohr/Castellacci/Fisichella eventually finished 2nd in class, with the Project 1 Porsche taking the final podium position.

What a difference a day makes! Whereas the FIA WEC race on the Friday had been run under virtually perfect dry weather conditions, apart from some rain in the closing stages, the Mobil 1 12 Hours of Sebring was a victim of the rain which continued to fall into the Saturday morning. Because of the rain and standing water around the track, the race was started under the safety car, and this stayed out for the first 40 minutes of the race, until the stewards decided that conditions were safe for racing to commence. However, the rain continued intermittently, making being on the correct tyre choice at the right time difficult for all the teams. As an aside, this was the first time that the race had started on a wet track, although the 1952 edition start had been delayed by an hour so as to start on a dry track.

The qualifying sessions saw the # 6 Acura ARX-05 of Cameron/Montoya/Pagenaud claim pole position from the # 77 Mazda DPi of Jarvis/Nunez/Bernhard by only 0.146sec. The # 7 Acura ARX-05 of Taylor/Castroneves/Rossi equalled the 2ndplace time, but as it set it later in the session it started from 3rd place on the grid, whilst the top five qualifiers were covered by less than half a second. The two car LMP2 class pole was taken by the # 52 Oreca LMP2 of McMurry/Aubry/Fjorback, by only 0.011sec from the similar # 38 example of Masson/Evans/Cassels. The GTLM class qualifying honours went to the # 911 Porsche 911 RSR of Pilet/Tandy/Makowiecki, just ahead of the sister # 912 car of Bamber/Vanthoor/Jaminet, although the latter was relegated to the back of the class grid after a qualifying procedural error. In the GTD class it was the # 86 Acura NSX GT3 driven by Farnbacher/Hindman/Marks that took the qualifying honours, whilst the only Ferrari in the race, the # 63 Scuderia Corsa entry, driven by MacNeil/Vilander/Westphal, could only manage a 7th place qualifying position.

As mentioned the race ran under the safety car for the first 40 minutes, and once the green flag was waved it was the Cadillac DPis that moved to the head of the field. The pole sitting # 6 Acura and its # 7 sister car of Castroneves/Taylor R./Rossi struggled with pace in the wet conditions, from which they never fully recovered during the course of the race, eventually finishing 4th and 9th in the reverse order of # 7 and # 6. .

The battle for the overall win turned into a fight between the # 5 and # 31 Action Express racing entered Cadillacs, driven by Nasr/Curran/Derani and Albuquerque/ Barbosa/Hartley respectively, and the # 10 example entered by Wayne Taylor Racing and driven by Van Der Zende/Taylor J./Vaxivierre. There was a constant juxtapose of positions throughout the 12 hours, with the # 31 Action Express car eventually emerging victorious, finishing a mere 1.03secs ahead of the # 10  Wayne Taylor Racing entry, whilst the # 5 Action Express car was only a further 3secs down the road after 12 hours of racing. The LMP2 class win went to the # 38 Performance TechMotorsports Oreca 07-Gibson of Masson/Evans/Cassels.

In the GT classes, initially the battle for GTLM honours was being fought between the Ford GTs and Corvettes, as the Porsches which had come out on top in qualifying struggled badly in the early wet conditions, and didn’t really get back into the reckoning until the later dry part of the race. However, once they were on slick tyres they came back strong, and the class pole sitting # 911 Porsche 911 RSR of Pilet/Tandy/Makowiecki, translated it into a class victory, whilst the sister # 912 car of Bamber/Vanthoor/Jaminet recovered to finish 5t hin class. The # 66 Ford GT in the hands of Hand/Mueller/Bourdais finished 2nd, whilst the # 3 Corvette driven by Garcia/Magnussen/Rockenfeller made it three different makes on LMGT podium.

In the GTD class it was the # 9 Pfaff Motorsports Porsche 911 GT3 R driven by Hargrove/Robichon/Kern that was at the sharp end of the class for much of the early part of the race, until a problem with the brakes late in the race dropped them out of contention. This left the door open for the pair of Lamborghini Huracan GT3s, namely the # 11 GRT Grasser Racing example of Ineichen/Bortolotti/Breukers and the # 44 Magnus Racing entry of Potter/Lally/Pumpelly to fight for the class victory, with the former taking the win by just under 3secs. There may have only be one Ferrari in the race, but it ran faultlessly, with strong performances from the driving squad of MacNeil/Vilander/Westphal, to take the final podium place in the dying minutes of the race, after a battle with the # 29 Montaplast by Land Motorsport entered Audi R8 LMS GT3 of Morad/Mies/Feller.